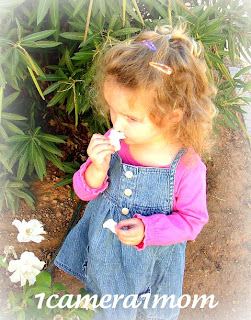 In this series of “Being Herself,” I have attempted to choose photos that best depict Amanda’s inner soul. In this shot, Amanda is 2 years old. As you can see, she’s making a study of the white roses by plucking the petals and smelling them. In order to create this photoshopped effect, I used Picnik. For this one I used Sharpen, Clarity, Boost, Matte and Text. I also posted another one of Amanda on her blog, a photo that I took of her today, where I used Stickers.

As you probably already know, Picnik will be closing on the 19th of April since Google is the proud new owner of these great editing tools. The cool thing is that Google has generously unlocked their premium features for the non-paying public to also enjoy.

Something you might not know is that the creators of Picnik have a new free on-line photo editing program called PicMonkey. It’s already been highly recommended by people who love Picnik. I’m sure that I will also use PicMonkey in the future. I have given it a try and it’s easy to use. I first heard of PicMonkey through Jonathan at Blogging Your Passion. I also added a review by Yahoo! for those who want to learn more.