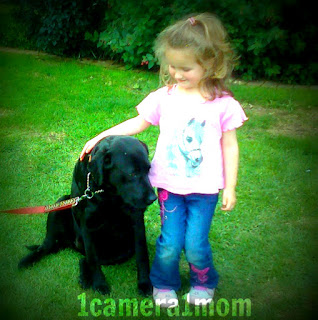 This photo was taken in October 2011 and Amanda was greeting this dog for the first time. I got two really nice pictures of her interacting with the dog that I’m going to post the second one tomorrow. In both photos Amanda turned out a little blurry, but the special effect called Lomo in PicMonkey and Lomo-ish in Picasa 3 helped to mask this.

This photo was taken on an outing where we chose to only bring Amanda along. You can read more about this outing and why we didn't bring the other kids along at Family Outings.
Posted by Christina Morley at 4:43 PM